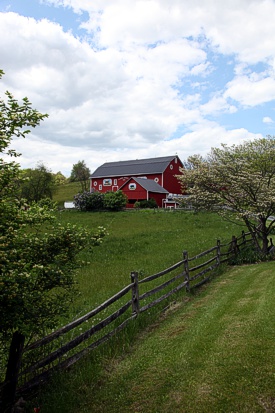 Weissenberg (original spelling) is derived from Weiss, meaning "white" and berg, a "castle" or "fortress". Weisenberg Township was named after Weissenberg, a fortress and town in Alsace, from the vicinity where many of the German Palatinate and Swiss settlers had come.

Weisenberg Township is part of the territory purchased by Thomas Penn in September, 1737 from the Lenni Lenape tribe of the Delaware Indians through the dishonorable "Walking Purchase".

Weisenberg Township, consisting of 16,732.5 acres, was established on March 20, 1753 at Easton, Northampton County. Today the Township is 6.5 miles long and 5.5 miles wide, and the Comprehensive Plan lists 17,167 acres. Lehigh County was separated from Northampton County on March 6, 1812. Legal records prior to that date are in Easton, while records after 1812 are at the Lehigh County Court House.

Home sites were chosen close to a spring of pure water and usually at the entrance of a valley. Tracts of land around the crude homes were created by marking the trees around it. The greater part of the land was taken up by applications for 50 to 100 acres. The early settlers built crude cabins from logs felled in the clearing of the land. From 1780 to 1800 most of these homes were dismantled and replaced by more durable log homes, some with a second story. An inventory of homes in Weisenberg for tax purposes was compiled in 1789. They reported 91 of log, 3 of stone and log, and 5 stone dwellings. In July, 1998 there were 1378 dwelling units in the Township.

During the American Revolution, Michael Bobst (Probst, Brobst), proprietor of the Bobst Manor House, organized the Weisenberg Associators who, eighteen months later, became known as the Weisenberg Militia. Bobst's regiment went to New York, joined Washington's Army and fought under General Sterling in the battle of Long Island. Later in the war while the British Army was at Philadelphia, there was an encampment at Bobst's Manor House, to recruit and drill soldiers for Washington's Army. His basement had two springs in it where refuge could be taken in case of invasion by British forces. They joined the army when the British evacuated Philadelphia and were engaged in the pursuit of the British through New Jersey. The Weisenberg Battalion disbanded after the war but was reorganized again during the Civil War.

The German settlers of Weisenberg Township were of the Lutheran and Reformed religions. Early worship services were conducted in private homes. Union churches were formed by both religions, sharing the facilities on alternating schedules. The first union church was built in 1750 by the Ziegels congregations. The Weisenberg congregations built their first church in 1754. St. Paul's Union Church at Seiberlingsville was built in 1857. Zions United Brethren in Christ Church (known locally as the Methodist Church) was built in 1876 but only continued worship services for about 35 years. The building was later owned by the Seipstown Literary Society and today is the Weisenberg Township Administration Building.

The first schools were a part of the church organizations and were conducted entirely in German. Since there were only two church schools well apart, other schools in private houses sprang up in other areas. The earliest teachers were men who had been educated in Europe. Prior to 1840, Rev. John Helffrich was responsible for bringing several teachers to Weisenberg Township, and Helffrich Academy was established as an institute of higher learning.

After the adoption of the unpopular common school system, where the students were taught in English, one-room school houses were built in each area of the Township. Other schools were in existence for short periods of time where German was still used. The one-room schools were closed in 1951 with all students being transported to what is now the Weisenberg Elementary School.

Businesses, such as a chocolate factory, a carriage works, a dairy, general stores, hotels and taverns, grist mills, tanneries, blacksmiths, gunsmiths and distilleries were established. Rev. John Helffrich had a printing press, and the Fritz family conducted funeral service operations in New Smithville for several generations. However, farming was the basic industry for the first 200 years of the Township's existence.

Additional history on Weisenberg Township can be found on the weisenberglowhill.org website.

The following items below are available at the Municipal Building